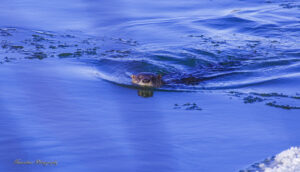 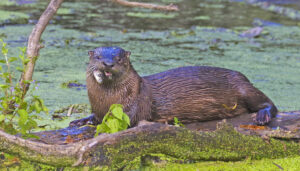 The North American River Otter is a playful and curious semi-aquatic mammal found in rivers, lakes and marsh habitats of quality water. Luckily, Iowa enjoys populations of river otters. Many states in the mid-west do not enjoy this delightful member of the weasel family as it is very sensitive to environmental pollution and habitat losses and its range has been reduced across its former habitats.Through some reintroduction programs, the otter has enjoyed a stable population in its current range.

Their thick water-repellent coat helps them swim up to 6 mph. They can hold their breath for up to 4 minutes and typically weigh in at 11 to 30 pounds. They live in family groups in late fall through winter during breeding season, then the female is alone with the babies from spring until late fall.

The female establishes a burrowed den along the waters edge with numerous tunnels connecting under water where litters consist of 1-6 babies with 1-3 an average. Interestingly, they are very near-sighted and can get too close to boats and people.

They are very active year round, typically at night during the spring through fall seasons, then are active mostly during the daylight hours in the wintertime.

Their diet consists mainly of fish and crustaceans. However, they will eat small mammals, young ducklings, aquatic insects, mussels and hibernating turtles.