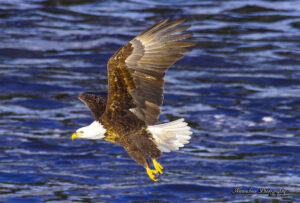 Iowa is one of the most important wintering grounds for Bald Eagles with thousands of the huge raptors moving into the state from the north to join our resident breeding birds. Wisconsin, Minnesota and Michigan all have some of the highest densities of nesting Bald Eagles in the lower 48 states and many of those eagles, especially from MN and WI move into Iowa during the winter months and frequently gather in large numbers around areas of open water to feed and roost.

Since the early 1990s, the Iowa DNR, plus a small army of volunteers has recorded this phenomenon during the Bald Eagle Midwinter Survey that takes place in the first two weeks of every year.  Surveyors scope the trees, air and ice for Iowa’s largest raptor while driving snowy roads which wind along next to many of Iowa’s biggest rivers.  There are 52 set routes in Iowa that cover over 1500 miles in 45 counties and along at least 13 rivers.  The 2019 survey was run from January 2nd through the 16th and was mostly characterised by extremely mild winter temperatures and weather leading up to the survey.  The average percentage of river covered with ice was only 18%, the lowest since 2007 and most surveyors indicated that the weather was “mild” to “very mild”. Hard to believe coming out of the polar vortex!

What did all this mild weather mean for the eagles?  There were fewer than last year’s close to record numbers but at 2,924 there were still plenty of birds counted.  When the weather is mild and rivers are open, we expect fewer birds to be counted because birds from up north may not feel driven to move south to look for food and the birds that are here are more spread out, making them harder to count. Also, at least four routes could not be surveyed because of the federal government shutdown.

The count of birds is usually split into adult and immature (and some unidentified) and those totaled 1,893 adults and 952 immatures.  This is important because the percentage of immatures in the population is a metric we use to make sure that successful reproduction is happening.  The percentage this year was 32.6%, almost identical to 2018’s percentage and it has been stable since 1994.

Notable this year, was the Missouri River, which had its highest count ever with 498 bald eagles counted!  The second highest count was in 2012 and was only 195.  The Mississippi and Des Moines rivers tend to have the most birds and while they were highest again this year, the Missouri came in a close third.

The data collected on Iowa’s bald eagle midwinter survey show an upward climb of eagle numbers from 1994 to 2019.  It’s an important survey for the annual trend it provides and along with eagle nest monitoring helps the Iowa DNR keep an eagle eye on this important species!

The Bald Eagle Midwinter survey is a national survey, currently coordinated at that level by the Army Corps of Engineers. The Corps analyzes data from the many states that participate which allows them to have an idea about eagle population trends at the regional and national scale. These type of data played a key role in determining in 2007 that the Bald Eagle was doing well enough to be removed from the Endangered Species List. 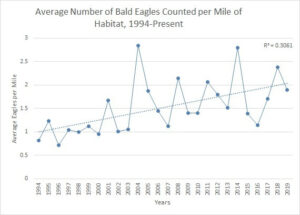