Paddlers floating from Backbone State Park to Manchester this spring will discover a new segment of the Maquoketa River — 3,200 feet of brand-new channel — meandering through a grassy meadow before dropping down a class II-III rapids through a rocky gorge. The new section was excavated, constructed, and planted over two years and completed in late December, 2018.

As canoeists and kayakers wind through the new section of river, a bit of reflection is fine tribute to the private landowners who made the project possible. Willard and Marcia Hawker had owned the dam and most of the lake bed as private citizens since 1998, when they bought it from Alliant Energy. Originally, Willard was interested in the lake-like Quaker Mill Pond upstream of the dam becoming a waterfowl preserve.

The restored river replaces both the old Quaker Mill Dam and lake. In 2010, an
earthen portion of dam broke for the second time in two years. The pond had been
filling in with silt. Homeowners along it noticed floods seemed to be getting worse until
the dike breached, draining the floodwaters. The county engineer had concerns with the
route the river carved below the breach, where it diverted under a bridge for Honey
Creek, a county road bridge not designed for a stream as large as the Maquoketa River.

Willard, an avid outdoorsman who believed deeply in conservation, decided the dam
had served its purpose and it was time for change. He asked for help from Iowa DNR
river programs and fisheries. The DNR helped form a partnership among the
landowners, fish biologists, the Delaware County Engineer, and Iowa DNR to determine
what to do. After a year of survey and analysis and communication with neighbors at Delaware Board of Supervisors meetings, the partners decided to remove the dam,
excavate a pilot channel through the old lake bed, and close off the breached area to
send the river back where the high concrete dam had stood since 1914. It was all
less expensive than the county constructing a properly sized bridge, and had the
advantage of lowering the 100-year floodplain for neighboring landowners.

Full design, planning and permitting took several years. Hawker increasingly became concerned he might not live long enough to see the project he  had come to believe in. As phase 1 of the project began construction in 2017, he and Marcia could often be seen watching the dam removed from a prominent vantage point.

Meanwhile, Willard announced his intention to donate land for an access to Delaware
County Conservation Board, the sponsor of the county portion of the Maquoketa River
Water Trail. ” Willard kept telling us all the way through just to do the right thing and that he trustedus to get it right,” said Nate Hoogeveen, River Programs Coordinator for the Iowa
Department of Natural Resources. “This project reduced a dam hazard, allowed fish
passage, conserved surrounding land, restored the river, and added a new public
access for a new water trail.  It’s humbling to be a part of a project that responds to so
many of tomorrows hopes and dreams for our rivers. Even more so when you get to
work with an individual like Willard.”

Willard Hawker was diagnosed with incurable pancreatic cancer during the holiday
season of 2018, just as the restoration project wrapped up. While in hospice, he
requested that word be sent to the DNR to make sure the final seeding was done in
time for spring. He passed away on Jan. 12, 2019, surrounded by family, at age 87. 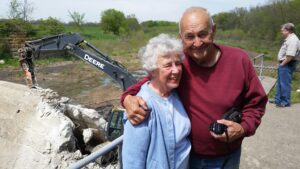